If you see a defect or a problem with a footpath or road – REPORT IT.

We get enquiries from a lot of people who have suffered injuries having tripped or fallen over defects in footpaths and road surfaces. Whether that be raised flagstones, potholes, risen tarmac due to tree roots, etc.

Most footpaths and roads are the responsibility of the local highway authority, and are maintainable at their expense. The law which governs this comes mainly from the aptly named Highways Act 1980. This sets out the rules, and what the local authority must do. In the simplest of terms – they are supposed to keep their roads and paths in good repair and reasonably safe.

But. There is always a but….they only have to do what is reasonable and proportionate.

So for example, they do not have to repair everything. If a defect is less than what is known as the intervention level, it does not have to be fixed. This is usually a difference in height of plus 1 inch in a footpath. It can be considerably more in a road – up to 5 inches for some councils.

There are two ways this can happen, either because they are told about, or because they notice it as part of a routine inspection. These inspections do not happen frequently. Depending on the nature of the street they could be 12 monthly. City and town centre areas are inspected more frequently.

Which brings us back to where we started – REPORT IT – because the chance of the local authority coming across it otherwise any time soon is unlikely, and if you let them know, they should fix it, and that could prevent somebody having an accident. 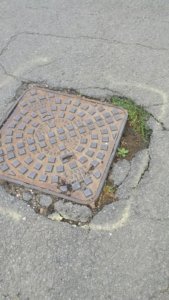