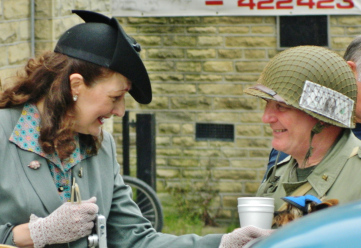 It was a day the like of which Batley has never seen before, well not since the 1940s at least. On 31 May, 2014 the clock was rolled back, as were the decades and the vintage years came back to town. And what a fantastic day it was. The weather was certainly kind and the sun kept shining all day long.

With a footfall estimated at around 10,000 people for the day, the town centre was packed full of people, and also packed full of things to see and do. Lots of people came along in vintage dress which added to the overall atmosphere.

At times you could have been forgiven thinking that you really had gone back in time. The musical entertainment got underway on the main stage in the marketplace a little after 10 AM and continued without break until 5 PM. In between those times the crowd was treated to music from across the decades from the 1920s through until late 1950s rock ‘n’ roll. Also in the marketplace there were 30 specialist vintage stalls selling all manner of vintage goods, everything from traditional pickles to vintage plates, military uniforms to model cars and everything in between.

The stalls were busy all through the day with people snapping at treats and bargains. And, then there were the vintage vehicles. There were 1920s roadsters, military vehicles, 1950s American muscle cars, even a vintage removal wagon with all its wares on display, and many many more. Then in the Memorial gardens there were vintage sports to be enjoyed.

A chance to try something a little simpler than the Xbox, with egg and spoon races, sack races and all manner of more old-fashioned fun and games. One of the busiest areas all day long was also to be found in the Memorial gardens, the NAAFI tent and dance area. To say the lovely NAAFI ladies were busy would be an understatement. There was never a moment in the day when there wasn’t a queue for a nice cup of tea and a slab of cake to go with it.

It was standing room only for most of the day to enjoy watching the dancers as they went through the steps to the music from specialist vintage DJs, and also the live music from the artists from the main stage who came up to do guest spots through the day.

To top it all off there was undoubtedly the most memorable and perhaps most emotional part of the day when we were treated to not just one but three fly pasts by a Spitfire from the Battle of Britain Memorial flight.

An experience that nobody will forget as the pilot brought the plane increasingly lower over the town centre and the marketplace. It really was a day to remember and we plan to do it all again and 30 May, 2015, don’t forget to put that in your diary.

When a marriage breaks down… Care Home Fees – what is the position?
Scroll to top